Yes, it has been a looong time, but I am still painting stuff for this project, still planning how to run it and still building terrain for it. "That is not dead..." and all that.
I have been painting Warlord and Gripping Beast figures to act as militia for the Gondor army and I finally have a whole unit ready. 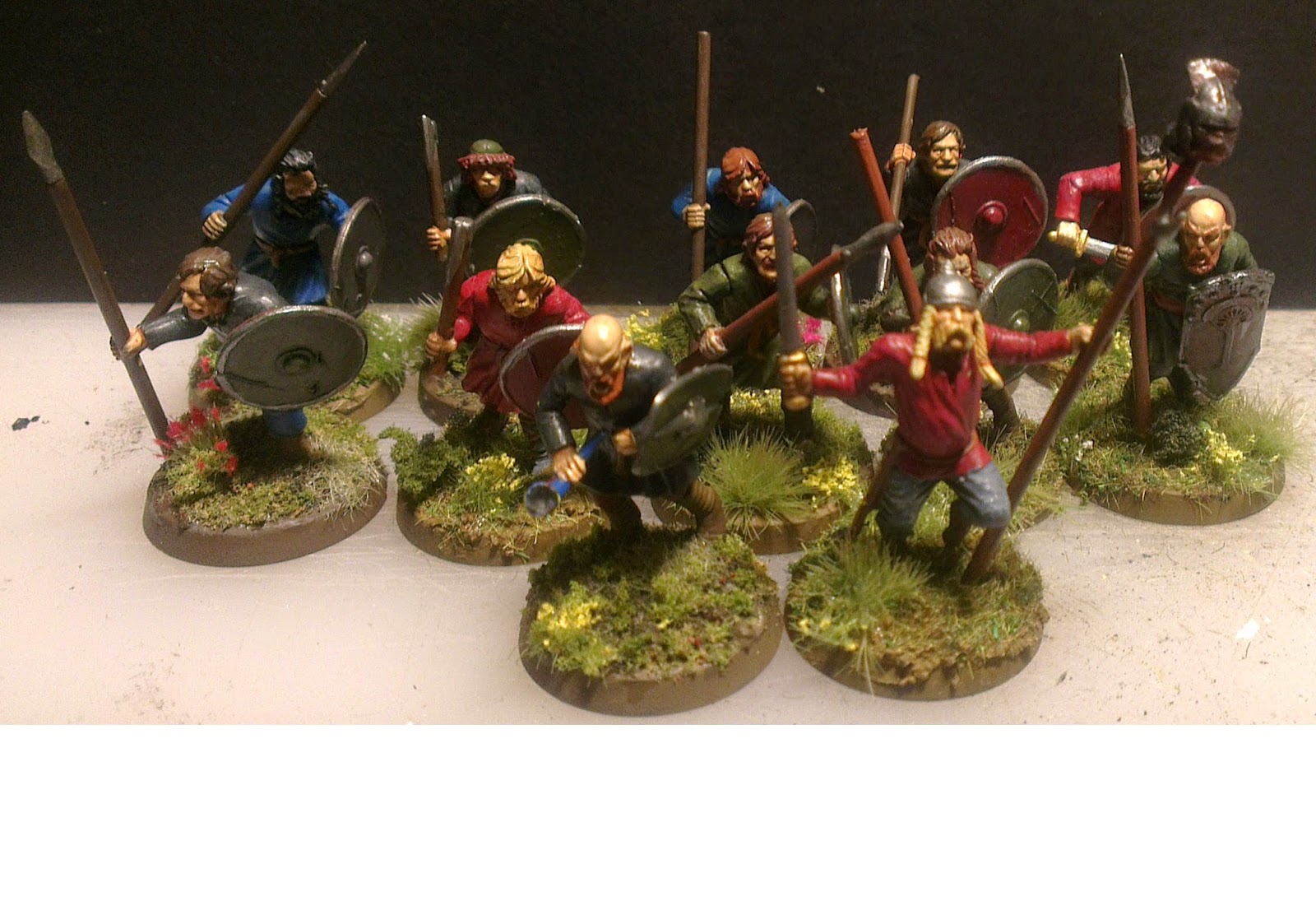 The idea behind these guys is that they should look like troops raised from Gondorian farmers and workers with a clear distinction from the plate-armoured regulars portrayed in the movies. That means these guys will take the first punch when the Baddies come streaming over the border. Poor buggers! Well, it should make for some very fun scenarios with rear-guard actions and cowboys-and-indians rescue attempts.
On the paint desk right now are the Veterans of Minas Tirith set from GW. Should work great as leader cadre for this rabble.
Upplagd av Thomas Nissvik kl. 22:48 5 kommentarer:

Six extra Elite lads for Lurtz army. They are standing in front of a pre-painted 4Ground house that I am sure they will be burning to the ground repeatedly during the course of the campaign.

The Champion of Evil!

Lurtz has just been given a Champion for his force. The function of a Champion in Dux is to fight individual challenges before a battle, to bolster the battle line and if needed, to lay down his life to protect his Lord. The figure is a metal Mordor Uruk-hai, a suitably big lad and perfect for putting up front when things get dangerous. 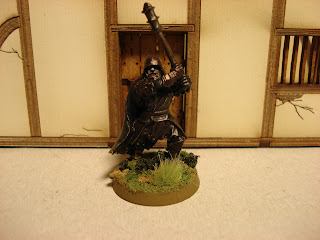 "Lurtz, are we the baddies?"

"I mean, they don't talk about 'tasting Uruk-flesh', do they?" And if you did not get that joke, click here.
Time to roll up the stats for the Baddies for Dux Gondorum. They will be Lurtz and his sub-commanders Nutz and Boltz.
First, Lurtz:
Age:26
Physique:Tall and Strong
Reputation: He is called Lurtz the Flatulent! I'm pretty sure his troops don't say it to his face...
Attribute: Master of Arms, +1D6 in close combat. Sounds right for an Uruk commander.
Background is Aristocrat, +1 to Loyalty rolls. He certainly is Sarumans Golden Boy.
Wealth is A Tribunes Tribute, the highest possible starting wealth. Seems that he gets the resources he requests for his fights.
I won't roll for his King as he is a raider and will not be involved in the Isengard power struggle.

Next, Nutz:
Age:24
Physique:Average
Reputation: He is known as Nutz the Wicked. I wonder what you need to do to be know as "the Wicked" among Uruks? Horrid stuff, I assume. I think we may have a Lt Speirs to our Maj Winters here.
And the next roll is Attributes and he gets Thrifty! An Uruk version of Speirs no doubt!
Background is Son of a Peasant, ie poor. No extra stuff from HQ from him, no wonder he has to steal!

And finally, Boltz:
Age:28
Physique:Short and Wiry
No Reputation
Attribute:Athlete
Background: Son of a Peasant

And there we have them: the baddies. Now it's time to dig into the lead mountain to find figures to represent Nutz and Boltz.

Time to start the campaign proper, or at least get the ground work in place. First step is to create stats for the leaders of the two sides. I'll start with the Gondorians, using the rules for Britons. The campaign will tell the tale of the rise (or fall) of the three sons of the Steward of Gondor: Boromir, Faramir and Hilfemir.

Boromir is the leader of the Gondorians, the Lord. First, I roll on the Age table. 4 and 5 means he is 30. Next, 5 and 2 on the Physique table makes him Of Average Build. Sounds like Sean Bean right there, except he was 42. Ah well, people lived harder lives in the Dark Ages. A good Reputation is important and getting 9 and 6 on the tale gives me Boromir the Righteous! Still on track for a Bormoir right out of the film. Attributes table gives me 9, Athlete. This means he as the ability to withdraw from the front line in combat to avoid being hit. Sounds less like Sean Bean, who has a stellar performance record when it comes to dying, but just might be right for  Boromir. A 9 on the Background table means that he is the Son Of A Centurion. Soldierly background, sounds good for our hero, but does not influence the game so I'll ignore it and maintain that he is the son of Denethor the Steward. Wealth gives me 5, A Tribunes Tribute. That will be needed when the war starts. I will count Wealth as a measure of how likely the respective Lords are of getting supplies and support from their respective armies, a high roll sounds right for the son of the ruler. The King table gives Denethors age as 58, sounds about right. In the rules, this is to keep track of when the King dies in case your Lord wants to fill his shoes. Yep, that might work, unless some Ranger comes walzing in out of the Big Bad Beyond and nicks the thone, of course...

Next I roll for his little brothers Faramir and Hilfemir.
Faramir turns out to be 30 as well, younger twin brother or a very busy year for Mrs Steward. He is of average build and is Lustful, giving him a -1 on Loyalty rolls. Younger twin sounds about right! I dispense with the other rolls for upbringing since he is established as a younger brother of the Lord.
Hilfemir turns out to be 20, of Small and Wiry build. He has however made himself a reputation already, being known as Hilfemir the Victorious! He is also Devout, meaning he will always follow the commands of the Church. And there we have it, my three main Gondorians.

Taking the Dux rules for a test drive

The missus was away for the evening so I decided to take the new Dux Britanniarum rules from TFL for a test drive.

Before you start reading, note that I missed a bunch of things.
* I did not roll for Force Morale
* I forgot to account for Shock for movement and combat
* Half the time I forgot to take Fate cards after Nobles had activated

I plan to run a solo campaign using these rules to fight during the early stages of the War of the Ring, following Boromirs rise to fame (or possibly the changing of the name from Minas Tirith to Saruman City), hence the name Dux Gonorum (thanks to Steve for the help with the latin).
I did not have time to prepare fully, create stats for my Warlords etc, nor get the terrain out of the basement, so it was just a bunch of figures on the kitchen table to test how movement and combat works in a Cattle Raid scenario from the rulebook.
The hastily assembled raiders were uruk-hai. Their Warlord Badash was played by the Ringwraith model and his two trusty Nobles Lurtz and Boltz by the Lurtz mini and the Engineer Commander in the funky helmet. Some horses stood in for cattle. Uruks with metal helmets are Elite, Uruks with hoodies are Warriors. 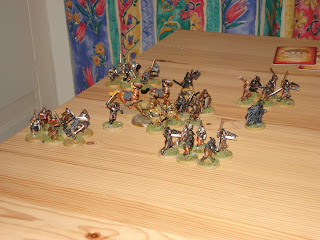 Their job was to move the cattle across the table, so they set out in march formation, trying to protect the stolen goodies.

In command of the Gondorians (centre back) were the three brothers Boromir (with the round shield), Faramir (pointing with sword) and Hilfemir, (holding the banner), plus Boromirs Champion (holding a spear). The forces were three Levy units, with spears, two Warrior units (swords), a Missile unit (bows) and an Elite unit (played by some Rohirrim). 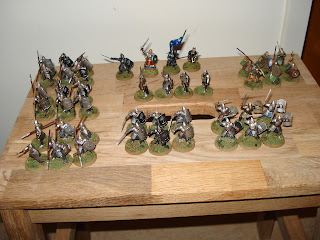 In Cattle Raid, the defenders enter at a random spot with 1D6 groups, then the rest enter on the turn after. The Gondorians came in at the top right end of the table as seen from the Uruks, Boromir leading the Warriors and Faramir the Levy. 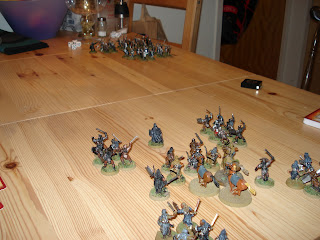 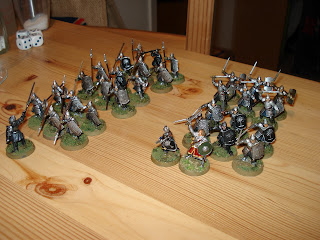 In the first actual game turn the Uruks moved everyone forward. Boltz sent one Group off on the right flank.
Boromir formed his Groups into a Shieldwall centred around him, Faramir moved his Levy forward. Since Faramir is Level 2, he can only activate 2 Groups, meaning that the third group fell behind. Hilfemir brought his Elite onto the table at the far end. The Missile troops entered and moved to the end of the line to have a clear field of fire. 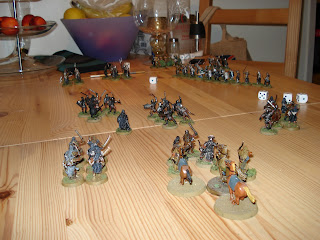 In turn two, Boromir ordered the Levy group out to his left flank while he moved his Shieldwall forward to block the Uruk advance. Badash and his Elites smashed into the Shieldwall and with the aid of the Aggressive Charge Fate card and some good dice rolling they killed five Gondorians and drove the line back. Transparent dice mark Shock. Faramir formed Shieldwall and Hilfemir kept moving forward. 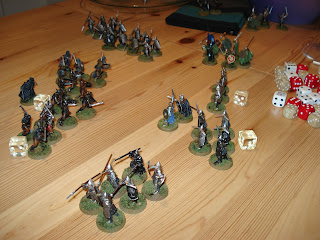 Boltz charged his Group at the Levy in front of them. Amazingly, the Levy stood firm against the onslaught and gave as good as they got. 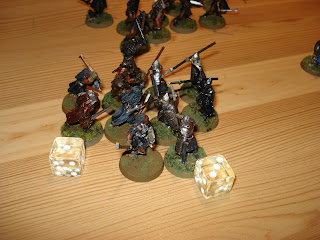 In turn 3, most Nobles spent their Command reducing Shock from the units they were with, but Boltz also continued the fight against the Levy and this time troop quality and leadership told and the Levy fled. 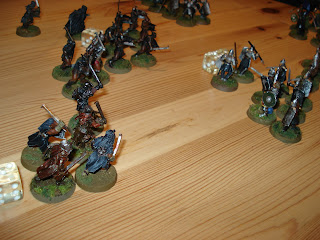 Meanwhile Faramir charged his Levy into the left flank of Badash's line and since the line was not closely held together, the Levy got to fight against only one Group of Uruks. The Group was smashed, the single survivor running away, but the Levy took lots of Shock. Last activation of the turn was Badash who brought his remaining line up against Faramirs Levy and drove them back. 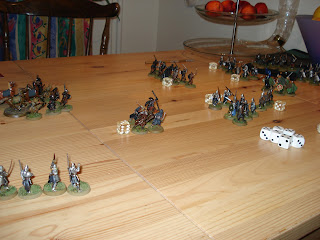 In turn four, Boromir orders his own Group and the one behind him to attack Boltz and his Warriors. Bormoirs Group clash with the Uruks, but the one behind him roll badly and does not make it into combat. After two rounds of combat, the fight is still unresolved. 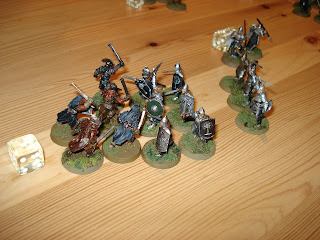 Meanwhile, Hilfemir decides that it is make-or-break time. He just about empties the Gondorian hand of Fate cards and charges his Elite at Badash and his remaining Uruks. Elites against Elites, Noble against Noble,a  dangerous attack, but without it, Badash would just slaughter the broken Levy troops so it was time for a heroic stand. Extra dice and +1 to the die rolls, it did not look bad... 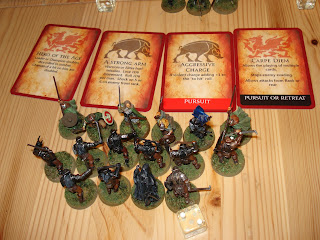 I give you the result of the 3+ To Hit-roll: 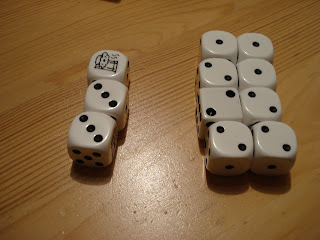 And the result of the Effect roll, where 1-3 is No Effect: 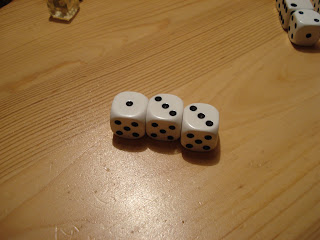 Badash and his gang, on the other hand, get two Kill results. Diced for separately, they both land on Hilfemir, who is killed. 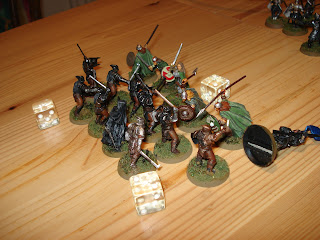 The next round of combat is a formality, the Gondorians break and flee. The turn ends with the Gondorian archers getting their first kill, taking down one of the Uruks guarding the cattle. 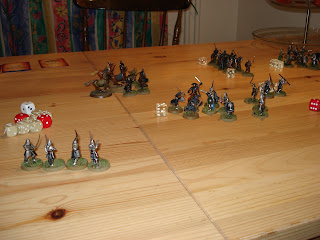 Turn five, last turn as I had to pack up and return the kitchen table to its original purpose.
Here I made a judgement call that turned out to be against the rules: I decided that the Group behind Boromir would be allowed to join the combat on his activation even though they were outside the 3" that are his command range while he is involved in combat. This is incorrect, they should have moved on their own at the end of the turn and not been allowed to join the combat at all.
Together, they drove Boltz and his Uruks back, but the situation was rather hopeless for the Gondorians overall. Badash was in control of the left with broken Levy and leaderless Warriors to his front, the cattle Group was still in good shape and could have swapped places with Boltz reduced Group to attack Boromir again. The archers had managed one kill in five turns of combat, not a big threat... 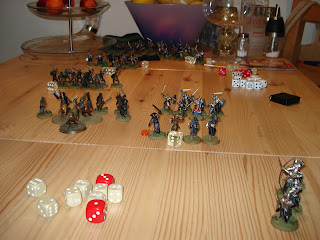 All in all, it was fantastic fun and I look forward to many more games, both solo and with my gaming group. Time to paint some Gondorian Palace Guard to act as my Elite unit for Gondor, that way I can use the Rohirrim as mercenaries in the future.